For the perks of SO-CLOSE Project, every cultural institution chose two tools that suit their purpose for future use. Villa Decius Association chose the interactive storymap and the participatory virtual exhibition. Kasia Ioffe from the VDA team responsible for gathering and preparing the VDA storymap shared with us the reasons and process of its creation.

The Villa Decius Institute for Culture is a non-artistic municipal a cultural institution, whose innovative form makes it possible to continue the programs which have been carried out in this place for 25 years and to open up to Krakow and the people of Krakow in the area of promoting the protection of the city’s cultural heritage. The Institute is active in areas related to Krakow’s membership in such organizations as the Organisation of World Heritage Cities (OWHC), the UNESCO Creative Cities Network, the League of Polish Cities and UNESCO Sites and the National Institute of Cultural Heritage. It has the original intention of Justus Decius from Alsatia and his son Ludovicus Decius the Younger to make the Villa a venue for the exchange of thoughts between artists and philosophers all over the world and the harbor of tolerance and freedom. The team of the Villa Decius Institute for Culture gathers people with passion, professionals, and promoters of cultural heritage.

I’ve got to the Institute being promoted by the ex-head of PEN Club of Belarus Andrej Khadanovich to the head of Villa Decius Dominika Kasprowicz. The day I was present at the writers’ meeting at Villa, we talked and discussed a couple of projects I can be involved in. The SO-CLOSE project was the most artistic, about poetic innovation on the topic of forced migration. So I decided it is exactly what I’m here for, being a person forced to migrate and being a poet and a psychologist and art therapist by education and work experience.

In the SO-CLOSE story map, geography connected with life is the main-narrative thread that links forced displacement itineraries to create a dialogue between the local societies’ memories and the present-day experiences, in a comparative way.
We created an archive with stories of forced migration and with art involved in it.

We conducted several interviews with people who were forced to leave their homes in Lybia, Ukraine, Afghanistan, Belarus, and Venezuela and we also conducted research, bringing up life stories of Polish, Jewish, and Roma people that were so close to our place and went so far.

I wrote letters to Multicultural Centre in Krakow and invited people, I met people in the Market and at the railway station to talk to, we were meeting and working with them a lot, interviewing and writing down the subtitles in 3 languages, later on, asking for and collecting their memories on photos, records, things.

Afterward, I was telling these stories to musicians who wrote the music. Further people wrote poetry dedicated to our participants. The music for the storymap was composed and played by Estonian – German musician Vsevolod Pozdejev and Belarusian-Ukrainian musician Zhenya Velko, whose stories will be also a part of the VDA storymap. 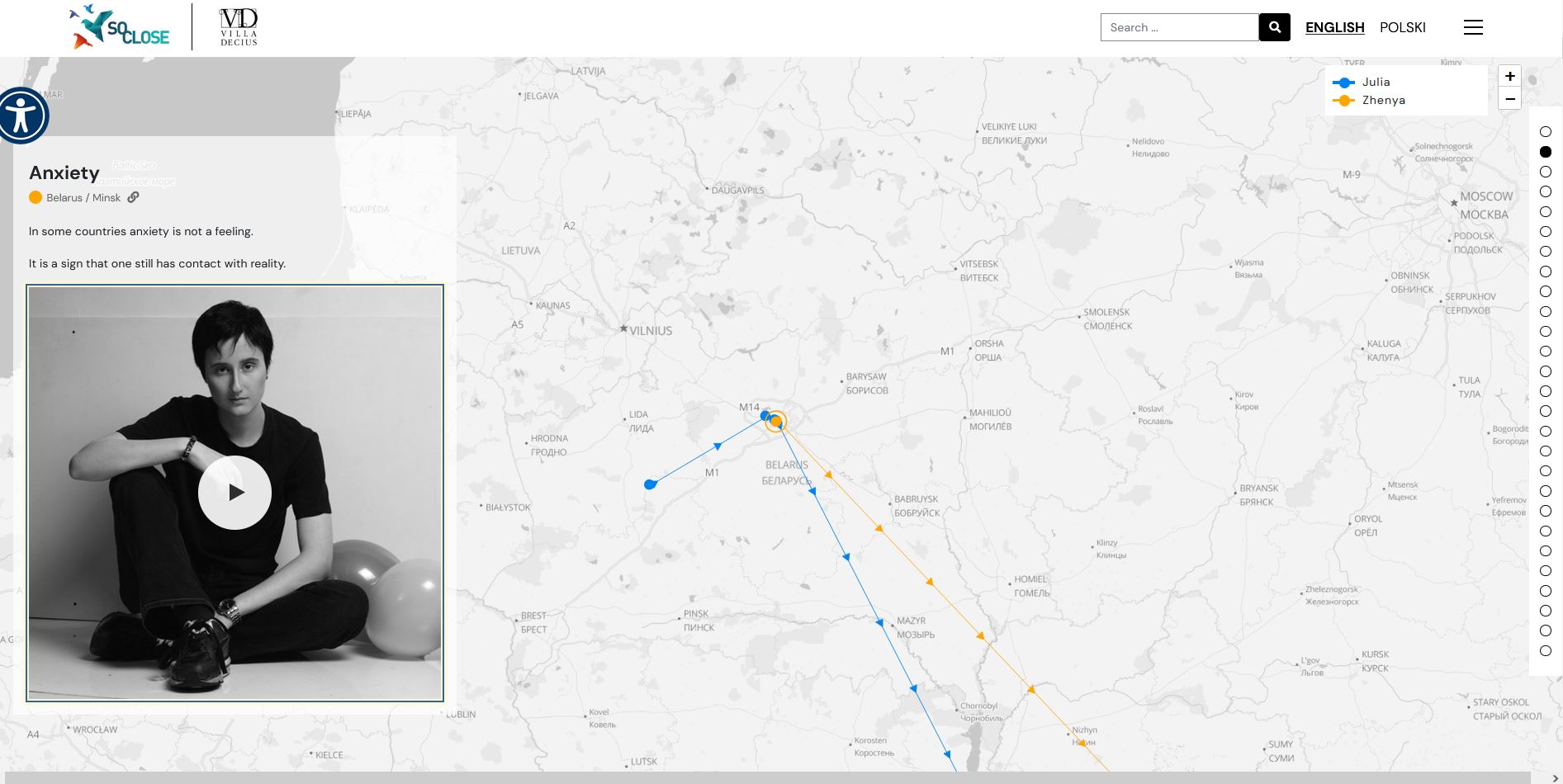 My favorite parts of the story map are the videos from home. The video with swingers and Sara Nazari with her little sister the day Taliban came, or photos of Julia with family and Omars happy-ending, or the poems and music that were created – just because it made artists feel and create so deeply.

We hope to cooperate with other institutions who want to contribute and create a meaningful project with us, not only by topic but also with the impact on society. For now, the tool is growing up empathy for migrants. It can be used in discussions, it can be the tool teens or adults are using at home, getting to know the stories of migrants and then talking about them during meetings or workshops.

Special thanks to operator Bożydar Pająk, montage Mateusz Paweł Bobek and each of the participants. Also, Volha Kovalskaya who helped me to write down half of the interviews collected to create the subtitles in 3 languages.