It is interesting to observe how things worked in the past in comparison to what is happening today. Since I was young, I had a tendency to dive into history books, trying to compare what I was reading to my own experiences regarding all sorts of topics; politics, religion, social affairs and war. More often than not, I reached the conclusion that history lessons are there to give examples on how one can conduct shady deeds rather than to urge us not to fall in the same mistakes again. In other cases, I read of amazing social structures that didn’t survive the passing of the ages. 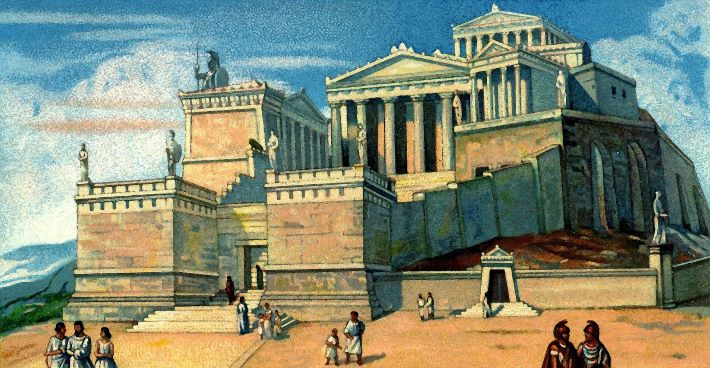 Bearing that in mind, I was curious to understand how ancient societies handled migration, this enormous and controversial topic of our time. How did the people treat migrants in antiquity? Are there any major similarities or differences compared to the present? The movement of people from one place to another, be it a city or an entire continent, was a human trait throughout history. The reasons have more or less remained the same; fleeing war, natural catastrophes, a prospect for a better life, exile and so on.

In ancient Greece migration was a common occurrence. Migrants were called metics, or ‘Metoikos’ /metikos/ in Greek, a name given to any of the resident aliens, including freed slaves. Metics were found in most city-states of Greece with the exclusion of Sparta and several city-states in Crete. Most sources of the metics’ status and living conditions were discovered in Athens, home to the majority of metics in ancient Greece . Metics occupied an intermediate position between visiting foreigners and citizens, having both privileges and duties. They were a recognized part of the Athenian community and distinctively protected by law, although subject to restrictions on marriage, property ownership and citizen rights such as the right to vote. It is true that most of the metics were Greeks from other city-states, however, a considerable non-Greek population derived from Lydia, Thrace and Scythia.

Metics constituted a significant source of workforce and skilled labour and comprised a large part of the population of Athens by the 5th century BCE. They were often employed on more menial, but nevertheless vital, tasks – including trireme building, rowing, and maintenance. The latter contributed immensely to the Athenian wealth, cultural and military prowess of that period, which still resonates today. Despite all this, metics were regarded with suspicion by some Athenians as possible conspirators that would see to the fall of the city. They were also regarded as “inferior” since they did not possess citizen rights. Others, however, recognized their invaluable contribution to the state.

In order to become a metic in ancient Athens one needed to have a sponsor (Prostates); a citizen of Athens that would vouch for them. They had to be drafted in military service like the citizens, pay higher taxes than citizens (metoikion), share all the burdens of citizenship but deprived from fundamental rights enjoyed by citizens. Nevertheless, some of the metics in Athens managed to get really wealthy and, in a few cases, even gained citizenship. Some of the well known metics that lived in Athens included Aristotle the philosopher, Aspasia Pericles’s wife and Lysias the speech writer (logographer).

Democracy was eventually abolished in 404 BCE and the city was governed by 30 tyrants. The metics were targeted by the oligarchs, often having their assets confiscated, driven out of the city or even executed. These events are vaguely reminiscent to the contemporary conservative governments and neoliberal practices they impose. Is this recognition of the value of migrants in society and at the same time the resentment of migrants a basic human trait? One would expect that after 2,500 years and the international watch on human rights the benefits and contributions of migrants in societies would outweigh any misconceptions or the persisting fear of foreigners. But as I said, I believe history lessons are there to give examples on how one can conduct shady deeds rather than to urge us not to fall in the same mistakes again.